Effect of gypsum on the modification of sodium soils

Home / Blog / Effect of gypsum on the modification of sodium soils

Effect of gypsum on the modification of sodium soils 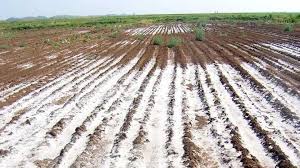 According to the definition of the American Salinity Laboratory (1954), sodium soil is soil whose percentage of exchangeable sodium (ESP) is greater than 15%. But in a study by Norscott and Chisen (1972), the researchers showed that if the soil ESP was greater than 6, it would affect the physical properties of the soil. McLentir (1979) also stated that permeability in ESP is significantly reduced by more than 5%. For this reason, in Australia, soils with an ESP greater than 6% are classified as sodium soils and need to be modified with gypsum. Zuka and Penn (2017) set the threshold in the definition of sodium soils as ESP> 6. ESP> 6 is abundant in soils of arid, semi-arid and even humid regions, the researchers said. Therefore, soils that are prone to gypsum due to high ESP are much more than previously thought. Gypsum is one of the most important modifiers of sodium soils. Calcium in gypsum is the best source of calcium in sodium soils (Caro and Duncan 2011). If other sources of calcium are used, the rapid dissolution of these compounds causes a rapid increase in soil salinity, which is beyond the tolerance of plants (Idmir and Carpenter 2005). In sodium soils, after the addition of gypsum, the calcium in the gypsum is replaced by the exchangeable sodium of the soil and sodium enters the solution phase. In this case, with a heavy irrigation, sodium can be transported from the soil solution to lower depths.