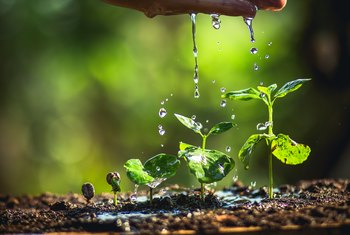 Gypsum application shortens the time that must pass after irrigation before plowing the land. Lands to which gypsum has been added can be plowed at a higher percent soil moisture content without compacting the soil or degrading its structure.

In other words, soil can be plowed at a wider range of soil moisture content and the energy required for plowing is reduced.

Soils treated with gypsum store 25-70 percent more available water on average compared to soils that lack gypsum. In most cases, the income resulting from the reduced irrigation water use is higher than the cost of applying gypsum.

Agricultural gypsum as a fertilizer

Gypsum is a suitable source of calcium for crops such as peanuts, tomatoes, wheat and corn and fruit trees including citrus that require large amounts of this element.

Both gypsum and lime are recommended for providing the calcium needed by plants with the difference that low lime solubility in water usually raises calcium concentration in soil to the critical level and does not satisfy plant needs for calcium.

Gypsum application is one of the most important methods of providing soil with calcium. The moderate gypsum solubility in water keeps calcium concentration in the soil at the normal level for plants and thus satisfies their calcium needs.